Beyond the Obvious: Why Foreign Firms Have Discovered the Cincinnati Region 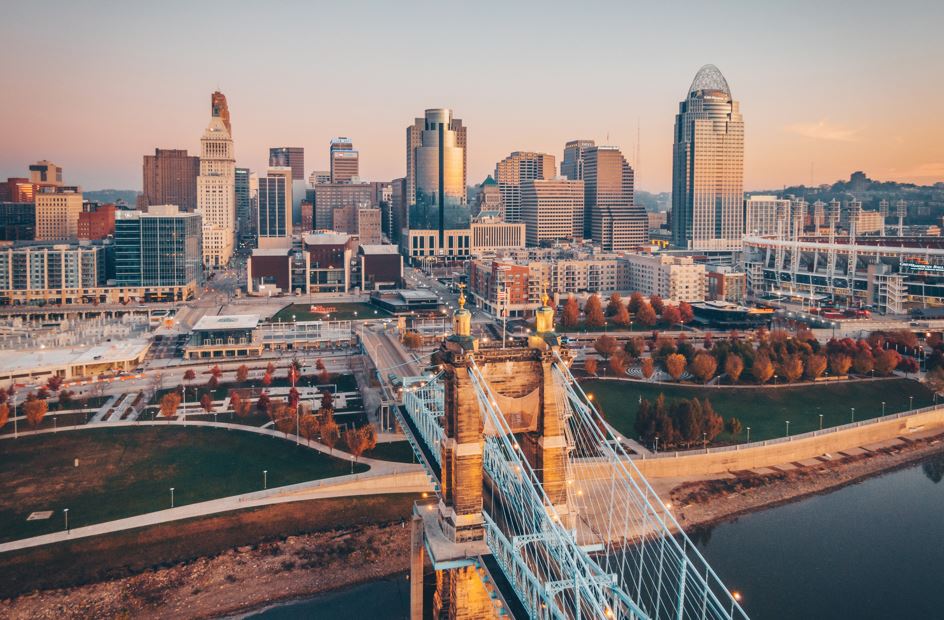 Often the obvious solution is not the best solution when faced with an opportunity; it’s the second or third consideration that unlocks the most value. For companies considering the U.S. market to expand their business operations, the same is true. Chicago, New York and Washington, D.C. may be universally known as major markets, but doing business in those locations isn’t always what it seems.

Similar to Toulouse over Paris, Modena over Milan or Zaragoza over Madrid, regions like Cincinnati (which extends into the states of Ohio, Indiana and Kentucky) offer an alternative to the “obvious” locations. It’s a choice that more than 450 foreign firms have made over the years, after fully considering the market access, pool of talent and financial benefits.

Prior to the world-changing year of 2020, the Cincinnati region ranked fifth in the U.S. for business attraction, retention, and expansion projects between 2016 and 2019. Cincinnati’s ability to compete with large cities like Chicago, New York, and Atlanta for foreign investment has a lot to do with the intersection of two rivers, three major highways, two class-A railways, and the Cincinnati/Northern Kentucky International Airport (CVG), as well as its proximity to most major cities and an estimated 70% of U.S. buying power all within a day’s drive.

Along with shipping giants DHL and the Amazon Prime Air Hub, these geographical and structural advantages have made the region one of the most connected and capable places for moving goods in the U.S. This is a key consideration for foreign firms who primarily seek markets with easy access to customers and a robust supply chain.

“With many clients located in the eastern part of the U.S., and the majority of our suppliers in the Midwest, we identified Ohio as the most strategic location for logistics when it came time to expand our capacity and customer base with a second U.S. location,” says Antonio Pagano, Chief Executive Officer of Modula, Inc. an Italy-based manufacturer of automated storage systems that entered the U.S. market in 2001. “Being near our suppliers and having efficient distribution channels to the rest of the U.S. is how we will continue to grow.”

In mid-2020, Spain’s Saica Group, one of the largest and most advanced European players in the development and production of recycled paper for corrugated packaging, announced its plans to establish its first North American facility in the Cincinnati region. On October 15, 2020, the company broke ground on the $72 million U.S. plant, which included 350,000 square feet of manufacturing space and 17,400 square feet of office space. Like Modula, t

“For us, we were interested in finding a site suitable for building a plant of the scope we were planning, access to a quality group of talented people who could join our team, and proximity to potential customers across the Midwest region,” says Gonzalo Aragüés, Industrial Projects Manager, Saica U.S. “When we started looking for locations in the Midwest region, there were several things that stood out when we looked at the Cincinnati region—its industrial culture, its accessibility to the rest of the Midwest, and the experience and talent of the people.”

The location element isn’t just an industrial benefit. It is just as important for corporate and regional headquarters as well as technology operations, as proximity to a greater share of customers and strong flight connections nationwide as flights from CVG help companies keep close to clients. It’s a reason other international firms such as Procter & Gamble, GE Aviation, Paris-based Safran and Italian-based Prysmian Group have established operations in the Cincinnati region.

Location is one thing, but every company must rely on well-trained employees to make their U.S. operations work. The Cincinnati region’s hundreds of thousands of workers, innovative education programs, and more than 26 technical centers, colleges, and universities go a long way in attracting and acquiring new foreign investments.

The prevailing community of investors, entrepreneurs, and foreign firms in the region is also instrumental in attracting additional foreign direct investment. “Cincinnati has a high percentage of European companies and professionals, and having that shared experience is extremely helpful as we determine how best to approach the process,” says Pagano. “Networking with these like-minded companies also helps us with hiring and operational strategies, as well as access to expertise.”

As Modula continues to settle into the Cincinnati region, they also have the benefit of a partnership with the European American Chamber of Commerce of Greater Cincinnati which works to foster relationships and build connections between the region and Europe, as well as ongoing support from JobsOhio, REDI Cincinnati, and others that play leading roles in the economic development of the area and assist with workforce recruitment and training needs. With assistance from these partners, Modula’s decision to open their second U.S. facility in the region earned them a Job Creation Tax Credit from the State of Ohio totaling 1.52% over the next seven years.

Saica Group too sees a lot of value in the people of the region and will reap the benefits of an eight-year job creation tax credit from the Ohio Tax Credit Authority, as well as an economic development grant and a JobsOhio Workforce Grant and additional incentives from the city of Hamilton. The company expects to create 64 new jobs in the region, ranging from skilled operators, engineers, and supply chain professionals, to sales, administration, and management.

“As a company, we have ambitious plans for growth. Expansion to the U.S. takes us to our 10th country. So, we don’t see this as just a new plant; we see this as the start of a new future for Saica,” says Aragüés. “Our values as a company are on par with the city of Hamilton and this region, with its proud history of manufacturing excellence. That’s one of the reasons we chose this area, and we will soon be looking for people who share our values and commitment to build their careers here.”

Ultimately, the decision for foreign firms to invest in a particular region mainly comes down to cost. From a low cost of living to the wide range of grants, financing programs, and tax incentives, the Cincinnati region has frequently been designated as one of the most cost-friendly metro areas to do business. It’s estimated that the overhead it takes to run a business here is about 40% less than in other major metros.

Another key financial benefit to the region is easy access to reliable utilities, with some of the most competitive natural gas and electricity prices in the country. Regional providers like Duke Energy have made significant investments to harden transmission and distribution systems against weather and other disruptions, as well as deploying advanced rapid restoration technology.  The region is also one of the most water-rich in the nation, ensuring clean water for manufacturing and food processing investors like Ocado, a UK-based company and one of the world’s largest dedicated online grocery retailers. The firm partnered with U.S.-based The Kroger Co. in 2020 to break ground on a $55 million customer fulfillment center that aims to bring customers fresher food faster than ever before.

Critical to cost-effective business in the region is also affordable and reliable Internet service supported by dense fiber optic deployments with an average of two fiber strands per business address. Regional companies have the luxury of leveraging the nearby Amazon Web Service data pipeline and high-speed fiber optics from AltaFiber (formerly Cincinnati Bell), which has invested $856 million in the region’s fiber deployment.

“While our new facility is not a complete duplication of our Maine facility, and both are important for the production of our automated storage solutions, the communication infrastructure is better in the Cincinnati region as we have dedicated fiber coming into the building,” says Pagano. “We have therefore decided to move our main networking equipment and servers to this new facility.”

For companies with primarily office operations like technology, cybersecurity and administrative functions, cost savings are often found in the salaries of their workers. Cincinnati has qualified talent across technology, business and professional services, but at a fraction of the cost of larger markets on the east and west coasts, making the region every bit as good of a headquarters or regional hub as a manufacturing and logistics destination.

More than 450 foreign firms have considered these costs over the years, just as much as the availability and quality of talent along with location. And for them, the clear choice wasn’t Chicago, New York or Washington, D.C. It was the Cincinnati region…obviously.