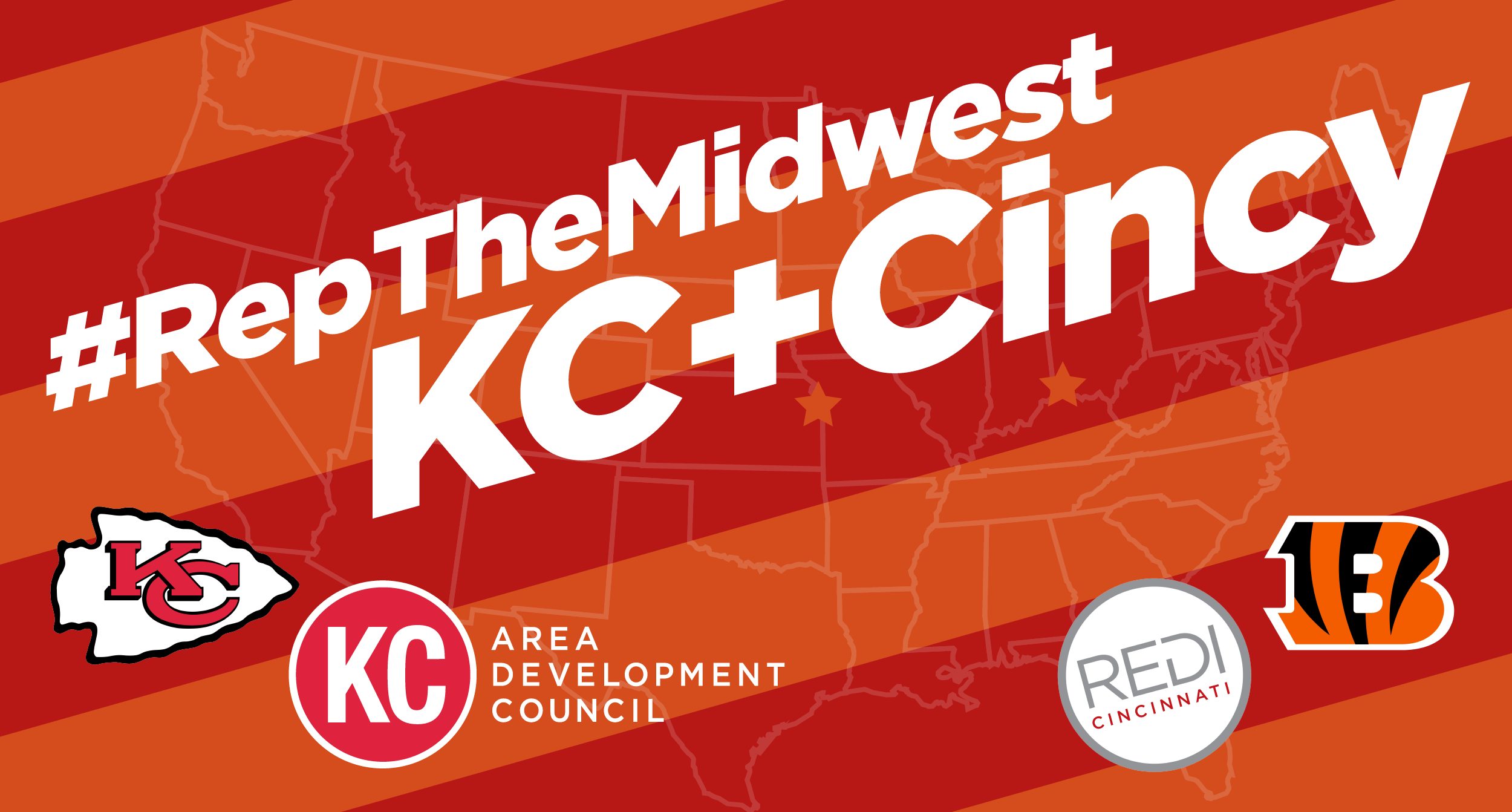 CINCINNATI, OHIO – January 27, 2022 – The Kansas City Area Development Council (KCADC) announced today that it has teamed up with REDI Cincinnati to #RepTheMidwest, taking the unique opportunity to honor the strengths of both markets ahead of the AFC Championship game this Sunday.

“This partnership comes at a time in the football season when most cities and teams are trash-talking their opponents. Our #RepTheMidwest collaboration enables both regions to shine before a rapt national audience, showcasing our tenacity, resilience and commitment to unparalleled economic success,” said Kimm Lauterbach, president and CEO of REDI Cincinnati. “As we in the Midwest rise, we also give, fueling giving initiatives that improve life for all in our regions. In that spirit, our organizations have engaged in a bit of a philanthropic wager … so that this weekend, both of our regions will win.”

The economic development groups have officially launched a volunteering day in both regions in observance of National Random Acts of Kindness Day on February 17. KCADC and REDI are inviting the business communities in both the Kansas City and Cincinnati markets to also pledge to participate in the day of giving along with them by supporting a charity of their choice. The groups have a goal of recruiting more than 500 volunteers collectively.

Based on the results of the AFC Championship Game, the losing team will be donating to the other development group’s charity of choice. The donation will focus on three areas that are part of an equitable and inclusive community: the welfare of Veterans, education and workforce development, and food insecurity.

“Our teams may be rivals on Sunday, but football is not the only testament to the rise of our great regions – KC and Cincinnati represent the Midwest’s major economic transformation as a prime attractor for business and talent on a global scale,” said Tim Cowden, president and CEO of KCADC. “With the opportunity to perform on a global stage during the Big Game, our markets have joined together to showcase the strength and viability of the Midwest.”

“Both of our regions fuel fast-growing companies in the technology, advanced manufacturing, animal health and bioscience, and food manufacturing industries,” continued Cowden.

The Cincinnati region’s strengths in aerospace, food and flavoring, and consumer insights, as well as the Kansas City region’s recognition as a leader in animal health and bioscience, and sports architecture, engineering and design shine a global spotlight on the Midwest.

One in every 10 workers is employed within the tech industry in Kansas City and it ranks in the top three cities for tech job growth. Cincinnati’s industry has increased by more than 12 percent in five years and was ranked by LinkedIn as the No. 9 city where tech strength defies the pandemic. Cybersecurity, one of the largest segments of the tech industry in both cities, continues to attract top businesses and talent.

Both regions attribute the increase in tech employment to a cost-competitive operating environment, a strong talent pipeline and an affordable cost of living.

“Our central locations make us both prime hubs for transportation and logistics, able to reach a high percentage of the U.S. population within days and perfect spots for multi-modal transportation networks,” said Lauterbach.

Kansas City is home to the largest rail center in the country (by tonnage) and has more Foreign Trade Zone space than other U.S. cities. Cincinnati features the fastest-growing air cargo hub in North America (at CVG), as well as the nation’s largest inland port. Both the Kansas City and Cincinnati regions are emerging as some of the largest and fastest-growing food and beverage logistics hubs in the U.S due to their prime locations in the country’s agricultural region.

For more information visit Lauterbach’s article on LinkedIn along on social at #RepTheMidwest.

About the Kansas City Area Development Council
The Kansas City Area Development Council serves the 18-county, two-state Kansas City area by marketing the region’s business and lifestyle assets to companies around the world. Working closely with its 50-plus state, county and community partners, the region has attracted more than 60,000 new jobs over its 40-year history. KCADC also leads the efforts behind the KC Animal Health Corridor, TeamKC, KC SmartPort and KC Global Design. thinkkc.com

There’s real excitement in the air today here in Cincinnati. Can you feel it? Together, we’re all ...