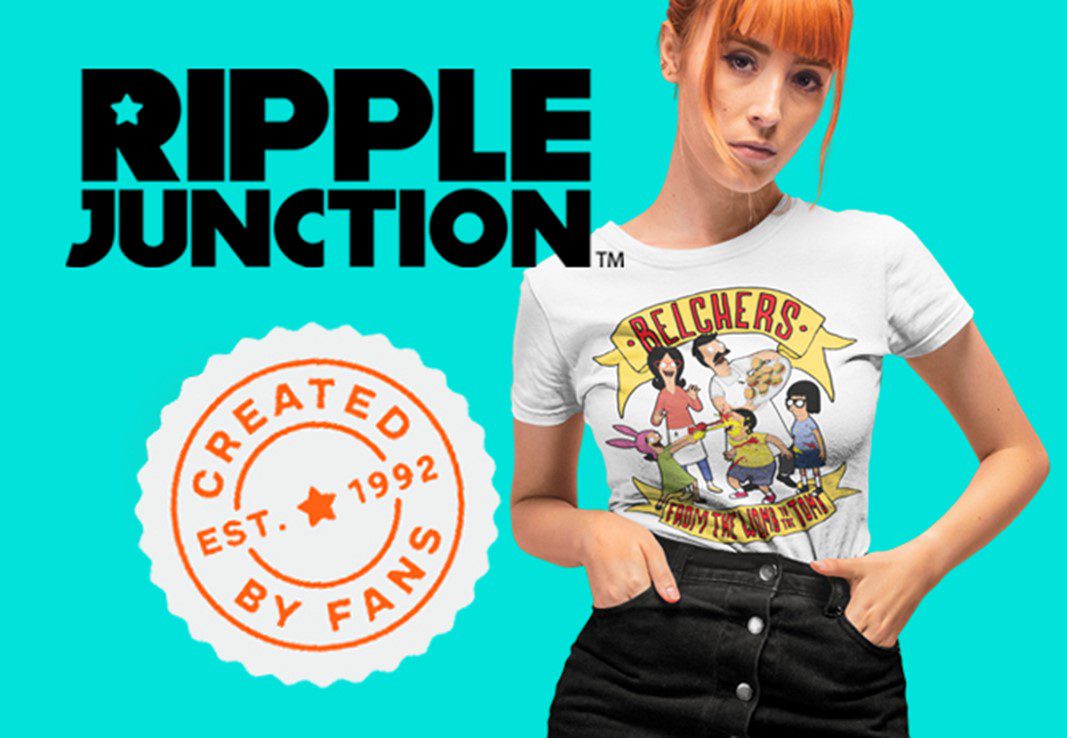 CINCINNATI, OH – March 11, 2021 – Ripple Junction, an industry-leading creator of licensed pop culture apparel and accessories, announced its plans to add 16 new jobs and to invest $150,000 in the Cincinnati region. Located in West Chester Township, Ripple Junction sells its products to major retailers, such as Walmart, Target, TJMaxx, Urban Outfitters, and Hot Topic, along with many other national chains.  It also has a rapidly growing E-commerce business, selling on Amazon, Walmart.com, and its own direct-to-consumer websites. The company will be hiring additional graphic designers, web developers, and marketing specialists over the next 12 months, which will expand its current team to more than 110 employees.

“Ohio continues to be the place that fosters the advancement of our business due to its pro-business mindset and access to a talented workforce,” said Neil Hoynes, Ripple Junction Design Company founder. “Ripple Junction has grown significantly the past several years and we are excited to continue our upward trajectory with the help of organizations such as JobsOhio, REDI Cincinnati, and West Chester Township.”

The founders of Ripple Junction began selling T-shirts in 1990 as a way to fund their travels following the Grateful Dead.  As demand for the company’s products grew, Ripple Junction expanded its offerings to include licensed properties from major studios and IP owners such Warner Bros., NBCUniversal, Disney, and Viz Media, among many others. Ripple Junction ultimately chose to focus its hiring at its West Chester facility, as opposed to adding to its remote workforce, because of its confidence in the available talent in the region and the collaborative nature of the company’s work. Ripple Junction is making a substantial investment in its online sales platform with the goal of significantly growing its direct-to-consumer business. Along with the rapid growth the company is experiencing with its anime (Japanese animation) licenses, products for the hit Netflix show Cobra Kai have also helped the company achieve record sales.

“Consumers are increasingly moving their shopping online, which the pandemic has intensified, leading to a 44% increase in U.S. e-commerce sales in 2020,” said Brandon Simmons, REDI Cincinnati vice president of project management. “Ripple Junction is investing in its future with the creation of 16 new jobs, which will support the growth of its e-commerce platform. I’m grateful for our partnerships with West Chester Township and JobsOhio, which were crucial to bringing this project to realization.”

Ripple Junction received assistance from a $100,000 JobsOhio Economic Development Grant, which will support the company’s hiring and growth initiatives.

About Ripple Junction
Founded in 1992, Ripple Junction is an industry-leading creator of licensed pop culture apparel and accessories.  The company got its start selling T-shirts at Grateful Dead shows, and now has a strong presence in numerous national retailers and online platforms.  Ripple Junction holds licenses spanning TV, Film, Music, Anime, and corporate brands from Warner Bros., Disney, NBCUniversal, and Sony Pictures, among many others.